A downloadable game for Windows, macOS, and Linux

Bakery Beats is a simple but wildly addictive puzzle game.

The objective is simple

- Match 3 or more pastries of the same type by swapping their places.

- Matches can be horizontal or vertical.

- The treats merge together into a bigger treat...growing until they burst in a shower of dough that feeds other treats.

- Get cascades of popping treats for even higher scores.

- As you progress the levels get more and more challenging.

You will need to get at least one star on each level to pass on to the next, but be sure to go back and challenge yourself and your friends to get three stars on each level!

While getting 1 star on each level may seem easy getting 3 stars on each is very very hard.

Bakery Beats is a match 3 game. The player needs to make a line of 3 or more cakes/pastries of the same type either horizontally or vertically.

This is achieved by swapping pastries, either horizontally or vertically, so that one of those pastries makes a match. If neither makes a match they will return to their starting positions.

When a match is made the other pastries in the match merge with the one that was moved to make a bigger pastry. Other pastries fall down from above to fill the newly created gaps potentially creating new matches which also merge and so on.

When the game starts all of the pastries are size 1 and as they merge they can grow to be sizes 2, 3, or 4. Bigger than that and the pastries are unstable and go SPLAT! and little chunks of dough fly out to merge with other pastries of the same type. If a chunk of dough merges with a larger pastry then it will also go SPLAT! and create a cascade which is worth more points.

The player can only move to the next level when at least 1 star has been awarded.

If the player has paid to remove ads then play can continue to the next page without watching a video.

There are 5 type of special blocks

The best strategy to use depends on the type of limits on the level. At the beginning most levels are limited by the number of moves so the best strategy is to make moves near the bottom of the screen to maximise the chance of secondary merges. Also sometimes it is better not to go for the biggest pop but to go for the chance of cascading pop as these are worth a lot more points.

On a time limited level the best strategy is to make as many moves as possible in the time allowed. Have your next move lined up before your previous move has finished. In 90 seconds it should be possible to make about 25 moves. 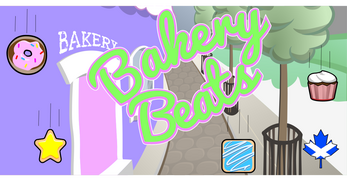